A Catholic Sexologist and 10 Years of Badass Babes

Ten Episodes! Whoo! Glad your still here. Today will be a little different and Emily tried to really stretch the 10 thing and I did what has occurred in the last 10 years for women. Enjoy! ~Kelley 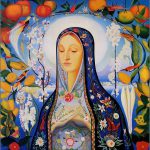 What they did: Christian mystic, visionary, and first sexologist?

Highlights from the last 10 years! (condensed from the podcast)

According to a poll by Variety magazine in 2015, Ellen DeGeneres did more to influence American attitudes in regard to gay rights than any other celebrity. The talk show host came out as gay in 1997.She has authored four books and started her own record company, Eleveneleven, as well as a production company, A Very Good Production. She also launched a lifestyle brand, ED Ellen DeGeneres, which comprises a collection of apparel, accessories, home, baby, and pet items.She has won 30 Emmys (29 daytime 1 prime-time), 21 People’s Choice Awards (more than any other person), and numerous other awards for her work and charitable efforts. Recently, on 2016, she won the Presidential medal of Freedom aka the United States’ Highest Civilian Honor which given directly by President Barack Obama.

Ai-jen Poo was a driving force behind the worker-led movement Domestic Workers United (a city-wide, multiracial organization of domestic workers) in New York City. The organization’s campaigns led to better conditions for domestic workers, raised awareness of economic contributions that domestic workers provide, helped get legal representation for abused workers, and crafted a framework of legal standards for workers. Ai-jen is a 2014 MacArthur “genius” Fellow, TIME 100 alumna and has been featured at United State of Women Summit, Aspen Ideas Festival, Obama Foundation Summit and the Women’s Convention. She is author of The Age of Dignity: Preparing for the Elder Boom in a Changing America as well.

Malala Yousafzai, an advocate for women’s education rights, won the Nobel Peace Prize at age 17, making her the youngest recipient ever. She is known for human rights advocacy, especially the education of women and children in her native Swat Valley in Khyber Pakhtunkhwa, northwest Pakistan, where the local Taliban had at times banned girls from attending school. She started her activism for the first time on September 2008 when she was 12, when her father took her to Peshawar, to a local press club in which she gave a speech titled “How Dare the Taliban Take Away My Basic Right To Education” . This caused the Taliban issued a death threat because of her activism. On 9 October 2012, while on a bus in the Swat District, after taking an exam, Yousafzai and two other girls were shot by a Taliban gunman in an assassination attempt in retaliation for her activism; the gunman fled the scene. Yousafzai was hit in the head with a bullet and remained unconscious and in critical condition at the Rawalpindi Institute of Cardiology, but her condition later improved enough for her to be transferred to the Queen Elizabeth Hospital in Birmingham, UK. The attempt on her life sparked an international outpouring of support for Yousafzai and on her 16th birthday on 2013, she gave speech for the United Nations to call for worldwide access education and even the United Nations called the event “Malala Day”.

Oprah Winfrey, the first African-American female billionaire, has had a significant influence on American culture since her time as a television talk show host. She played a key role in the emergence of Barack Obama as a presidential candidate and continues to be politically active.

Judith Butler is a philosopher and gender theorist who has written influential books on feminist and gay topics. Her books, such as “Gender Trouble: Feminism and the Subversion of Identity” and “Bodies That Matter: On the Discursive Limits of Sex,” challenge conventions about gender.

Beyonce has more Grammy nominations, 66, than any other female performer, and she has won 22 times. She is an icon for feminism and for African American culture. She dipped her toe into politics at Super Bowl 50, when she had her backup singers dress in black with black berets and afros to protest racial injustice.

J.K. Rowling emerged from relative poverty in the United Kingdom to become the world’s first billionaire author as the creator of the Harry Potter fantasy book series. Her influence was such that she was the runner-up as Time magazine’s person of the year in 2007 because her books had been such an inspiration for her fans. Aside from her literary work, Rowling has established and contributed to charitable organizations to fight poverty and social inequality throughout the world. Since becoming so wealthy, Rowling has donated funds to several different charities, especially in the areas of poverty and multiple sclerosis (the disease from which her mother died). Her contributions, as well as her volunteer work, have been an example to millions of young readers.

Yoani María Sánchez Cordero is a Cuban journalist and entrepreneur who gained notoriety and fans such as President Barack Obama for writing critically about Cuban daily life. She depicts life on the island nation through her blog “Generacion Y” that is translated into 17 languages. Sánchez Cordero overcomes censorship by emailing her blog to friends living outside Cuba, who then post them online.

Laverne Cox is one of the highest-profile figures in the transgender community. She plays a transgender character on the Netflix series “Orange Is the New Black” and does much advocacy work on behalf of her community. Cox has played other transgender characters on television, appearing in 2008 on the VH1 show “I Want to Work for Diddy.” She is the first transgender woman of color to appear on a reality TV show. She is the first transgender person to be on the cover of Time magazine. In May 2016, Cox was awarded an Honorary Doctorate from The New School in New York City for her progressive work in the fight for gender equality.

Michelle Obama is a lawyer and writer who was First Lady of The United States from 2009-2017. She is married to the 44th President of United States, Barack Obama. She is also an advocate for poverty awareness, nutrition, physical activity and healthy eating. Her political and activism works as First Lady are really inspiring, some initiatives of First Lady Michelle Obama include advocating on behalf of military families, helping working women balance career and family, encouraging national service, and promoting the arts and arts education. On May 2014, she joined the campaign to bring back school girls who had been kidnapped in Nigeria. In 2010, Obama undertook her first lead role in an administration-wide initiative, which she named “Let’s Move!,” to make progress in reversing the 21st century trend of childhood obesity. She’s also supports the LGBT rights and same-sex marriage.